Miss Muriel, the church organist, was in her eighties and was a spinster all her life.

She was admired for her sweetness  and  kindness to all.

One afternoon the young pastor came to call on her. She invited him into her quaint sitting room to have a seat while she prepared tea.

As he sat facing her old musical instrument, an organ, the young minister noticed a cut-glass bowl sitting on top of it. The bowl was filled with water. In the water floated, of all things, a condom.  When she returned with tea & scones, they began to chat. The pastor tried to stifle his curiosity about the bowl of water  and  its strange floater, but soon it got the better of him and he could no longer resist.

“Miss Muriel”, he said, “I wonder if you would tell me about this?” pointing to the bowl. “Oh, yes” she replied, “isn’t it wonderful ?”

I was walking through the park a few months ago and found this little package on the ground. The directions said to place it on the organ, keep it wet and that it would prevent the spread of disease. Would you believe, I haven’t had the flu all winter “

A man and his wife were getting a divorce at a local court ; but the custody of their children posed a problem.

The mother jumped to her feet and protested to the judge that since she had brought the children into this world, she should retain custody of them.

The man also wanted custody of his children, so the judge asked for his side of the story.

After a long moment of silence, the man rose from his chair and replied:

“Your Honor, when I put a coin into a vending machine, and a Coke comes out, does the Coke belong to me or to the machine?”

LAUGHTER IS THE BEST MEDICINE!

The Allergists voted to scratch them, but the

Dermatologists advised not to make any rash moves.

The Gastroenterologists had a sort of a gut feeling about it, but the

Neurologists thought he had a lot of nerve.

The Obstetricians felt he was labouring under a misconception.

Pathologists yelled, “Over my dead body!” while the

The Psychiatrists thought the ideas were madness, while the

Radiologists could see right through them.

The Surgeons were fed up with the cuts and decided to wash their hands of
the whole thing.

The ENT specialists didn’t swallow it, and just wouldn’t hear of it.

The Pharmacists thought it was a bitter pill to swallow, and the

Plastic Surgeons said, “This puts a whole new face on the matter…”

The Podiatrists thought it was a step forward, but the

Urologists were pissed off at the whole idea.

The Anaesthetists thought the ideas were a gas, but the

Cardiologists didn’t have the heart to say no.

In the end, the Proctologists won out,

leaving the entire decision up to the arse holes in parliament.

One day I will be in one of these scooters!

With that in mind, I bought a scooter for my future:
which was easy on gas,

could zip me around town

and seems to meet my EVERY need.

Remember: Senior Citizens Are Valuable!
We are more valuable than any of the younger generations.
We have silver in our hair.
We have gold in our teeth.
We have stones in our kidneys.
We have lead in our feet and,
We are loaded with natural gas!

An e-mail carried some bitter truths closer to our hearts and homes. Thought I would share the mail  with you. It is claimed to be  tranlated from a chinese version.

Here it is my friends….

WHERE  YOUR LIFE STAND HERE ON EARTH

None of us have many years to live, and we  can’t take along anything when we go, so we don’t have to be too  thrifty…

Spend the money that should be spent,

enjoy what should  be enjoyed,

donate what you are able to donate,

but don’t leave all to your  children or grandchildren,

for you don’t want them to become parasites

who are  waiting for the day you will die!!

Don’t worry about what will  happen after we are gone,

because when we return to dust,

we will feel nothing  about praises or criticisms.

The time to enjoy the worldly life

and your hard  earned wealth will be over!

Don’t worry too much about your  children,

for children will have their own destiny

and should find their own  way.

Don’t be your children’s slave!

Care for them, love them, give them gifts

but also enjoy your money while you can.

Life should have more to it

than  working from the cradle to the grave!!

Don’t  expect too much from your children.

would be too  busy with their jobs and commitments

to render much  help.

Uncaring  children may fight over your assets

even when you are still alive,

and wish for  your early demise

so they can inherit your properties and  wealth.

Your children take  you for granted

that they are rightful heirs  to your wealth;

but that you have no claims to their money.

Don’t trade in your health for wealth,

by working yourself to an  early grave anymore,.

may not be able to buy your  health.

How much is enough?

Out  of thousand hectares of good farm land,

you can consume only three quarts (of  rice) daily;

out of a thousand mansions,

you only need eight square meters of  space to rest at night.

So,  as long as you have enough food

and enough money to spend,

that is good enough.

You should live happily.

Every family has its own problems.

Just do not  compare with others

for fame and social status

and see whose children are doing  better,

but challenge others for happiness,

Don’t  worry about things that you cannot change

because it doesn’t help and it may  spoil your health.

You  have to create your own well-being

and find your own place of happiness.

As long  as you are in good mood and good health,

and have fun in doing,

then you will pass your time happily every  day.

One  day without happiness, you will lose one day.

One day  with happiness, then you gain one day.

In good  spirit, sickness will cure;

In a happy  spirit, sickness will cure faster;

In high  and happy spirits; sickness will never come.

learn to cherish  the goodness around  friends and families

They all make you feel young and  “wanted”…

without them you are surely to feel lost!!

Wishing  you all the best for the years to come.

I wasn’t born then to remember the Ross sisters. The clip below was taken in 1944 for the movie ” Broadway Rhythm”. They were  acrobatics and contortionists  were  also able to sing.   Ross sisters from Texas were popular in the nineteen forties.  They definitely had gifts to show  the public not like the   current so-called celebrities who are raking money  for not having anything to rave about.

If they would have lived in this century Ross sisters  would have been household names.

This year November 19th has been recognised as the  First World Toilet day by the United Nations. 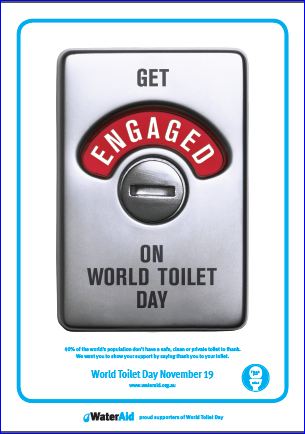 WaterAid is an international non-governmental organisation who has a vision to provide safe water and sanitation to every citizen of the world. World Aid also build thousands of toilets globally each year with the help of local people and partners and demand governments to target to spend  more towards sanitation.

Next time when you contemplate  on the throne of porcelain, spare a thought for the 2.5 billion people of the world who don’t have the luxury of having a toilet!

Did you know the loo facts ?

– 2.5 billion people (one in three of the world’s population)  don’t have a safe, clean and private toilet.

–  Toilets have added 20 years to the human life expectancy over the past two centuries.

–   More people in the world have a mobile phone than a toilet.

Spare a thought for the guy sitting in the corner. What would you do without him?

Sometimes the best intended stories do not get the praise or credit for various reasons. A painful story told by a loving wife falls into that category.

The pastor asked if anyone in the congregation would like to express their praise
for answered prayers.

Mrs. Smith stood and walked to the podium.

“I have a praise” she said.

“Two months ago, my husband, Phil, had a terrible bicycle  accident and his scrotum was completely crushed. The pain was excruciating and the doctors didn’t know if they could help him.”

You could hear a muffled gasp from the men in the congregation as they imagine the pain that poor Phil must have experienced.

“Phil was unable to hold me or the children,” she went on, “and his every move caused him terrible pain.”

We prayed as the doctors performed a delicate operation. Surgeons were able to piece together the crushed remnants of Phil’s scrotum, and wrap wire around it to hold it in place.”

Again, the men in the congregation cringed and squirmed uncomfortably as they imagined the horrible surgery performed on Phil.

“Now,” she announced in a quivering voice, “thank the Lord, Phil is out of the hospital and the doctors say that with time, his scrotum should recover completely.”

All the men sighed with unified relief.

The pastor rose and tentatively asked if anyone else had something to say.

A man stood up and walked slowly to the podium.
He said, “I’m Phil.” The entire congregation held its breath.

“I just want to tell my wife the word is sternum.”

How many of us have lactose intolerance?  Below is an article published in Nature explaining the single mutation of gene and the diaspora of the milk nation.

When a single genetic mutation first let ancient Europeans drink milk, it set the stage for a continental upheaval.

Click Archaeology of the MILK revolution for  the full text