While surfing through the net, I came across this name on a obituaty website.

All in one word with 28 English alphbets.

If dissect the name, one will end up with at least 5 Tamil names.

However the trader from Northern Province of Jaffna, Sri Lanka has shorten his name to Sivapatham.

Just wondering how he managed to write his name on a passport form or on the online forms?

Bursting with big blooms  (clicked at an Ilford front garden

Does anyone know the name of this beautiful flower ? 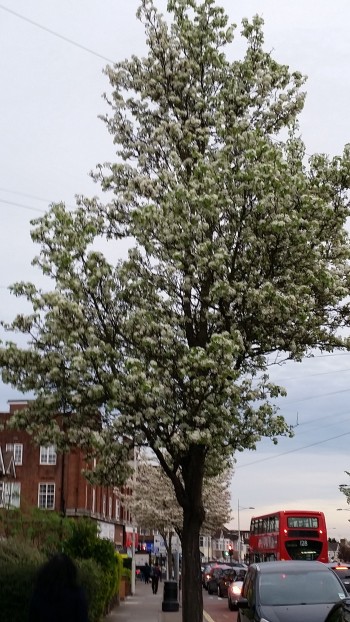 A tree still hasn’t woken up

Palm tree in a different angle

Every 15th of March referred as “The Ides of march” and once again we are having it today.

So why is it referred  as the IOM?

Once upon a time March was the first month of the Roman calendar.  The ancient Romans did not number the days of the month, instead based on 3 phases of the moon. The 3 lunar- phase- markers were named Kalends, Nones and Ides. The Ides indicated the full moon of that month, and being March the first month of the year, the first full moon was called “The Ides of March”. Romans marked the Ides of March with celebrations to welcome the new moon.

But Everything changed on 44 BC  Ides of March .

A coup was plotted against  Julius Caesar. Emperor of Rome was assassinated  on the Ides of March. History would tell you that his best mate Brutus was involved too.

Then came Shakespeare the playwright who quoted “Beware of the Ides of March” in his play  “The tragedy of  Julius Caesar” (~1599-1623). Since then the day has been scarred as bad omen.  Would you classify this as a bad omen? I will let you decide.

It is a lovely depiction of peace  if and if all the religions come together. the image is poached from a facebook page author- unknown.

Many faiths with one future

Tamil cinema-song played on a  South Indian classical wind instrument. This instrument referred as “Naatha swaram” made out of wood.

It is an  old article  about a youngster from Jaffna. Hope he reaches his endeavors in due course.

In all his music videos, T. Thuvarakan is a picture of concentration. Playing two keyboards simultaneously, his fingers deftly search for the right note, not missing them even on one occasion. A big fan of Tamil film music, the 21-year-old’s most recent videos are that of hit Kollywood songs, including ‘Thalli Pogathey’ (Achcham Enbadhu Madamaiyada), ‘Thangamey’ (Naanum Rowdy Dhaan) and ‘Aaluma Doluma’ (Vedalam).

What’s so special, you might ask. Thuvarakan is doing all this in his nondescript room at Jaffna, Sri Lanka, where he was born and lived through three civil wars — in 1995, 2000 and 2006. And, he can play a dozen instruments, including the mridangam, tabla, morsing, violin and guitar. “Jaffna is famous for its culture. But due to the conflict, musicians here do not have access to technology like our counterparts in the Indian film industry. Of late though, the signs are encouraging; people are trying to produce their own albums and short films,” he says.

His passion for music started when he was just three. His father, a singer, was his inspiration at that time. “I started listening to Tamil film songs in my childhood. My father, who is also my first music guru, taught me the popular ‘Kanne Kalaimaane’ song,” he recalls in an e-mail interview. Soon, Thuvarakan was enrolled for mridangam classes, an instrument in which he showed promise.

In 2012, even as he struggled with his studies, he formed a music band called Vaanavil. Consisting of 18 members, the band plays Carnatic, English, Tamil and Sinhala songs. The reach of the band might be restricted, but Thuvarakan seems to be making use of social media to get noticed. “In Jaffna, we have very less media support; they do not give priority to Tamil musicians,” he writes. “We are dependent on social media to reach our talent to the world. It also helps us get exposed to different styles of music.”

After finishing his Ordinary Level Exam, Thuvarakan got a chance to use social media to his advantage. His first independent release was a song he composed for his school cricket match. Buoyed by the appreciation he received, Thuvarakan did a cover version of the ‘Yaendi’ song from Puli and uploaded it. “I got a lot of positive feedback for that,” he says. Soon, he was working on other covers of songs from hit Tamil films. The youngster, who considers Ilaiyaraaja and A.R. Rahman, as his role models, dreams of becoming a composer in the Indian music industry someday. “I will finish my university education in four years and then shift to Chennai to make my dreams come true,” he says.

Check out his work at facebook.com/T.Thuvarakan

Chair posture  a type of Yoga?  Diversity of Art from China.

Today is the 68th death anniversary of Mahatma Gandhi the Father of the Nation of India. Mahatma means the great soul (maha – athma). Gandhi was assassinated at the former Birla house in New Delhi on the 30th of January 1948. The non- violence advocate was met by his assassin Nathuram Godse a Hindu nationalist while he was walking with his grand nieces to a prayer in the garden. Gandhi was aged 79 (2 October 1869 – 30 January 1948)

Former Birla house is now known as Gandhi Smirti which serves as a museum for the great soul as he has spent his last days in that house.  Last January our family had the opportunity to visit the former Birla house and would like to share some photos on Mahatma Gandhi’s 68th Death anniversary.

On the way to his prayers

Accompanied by his grand neices 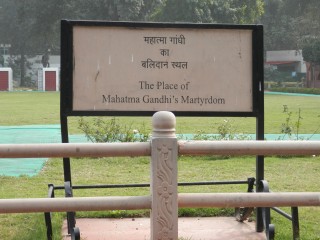 The place of Gandhi’s martyrdom 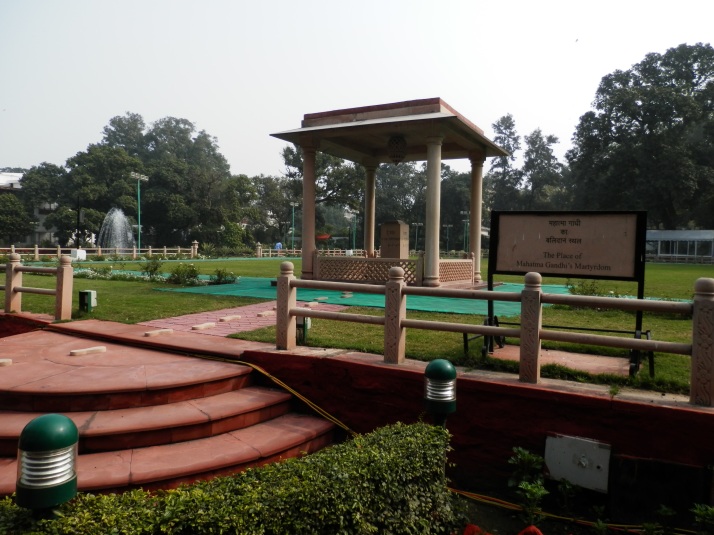 “Hey Ram”  was the last words uttered by the Great Soul.

Mahatma Gandhi stayed in a room at the back of the Birla’s house. It was a simple room with his only few possessions as  described in the images.

A view from his room to the garden 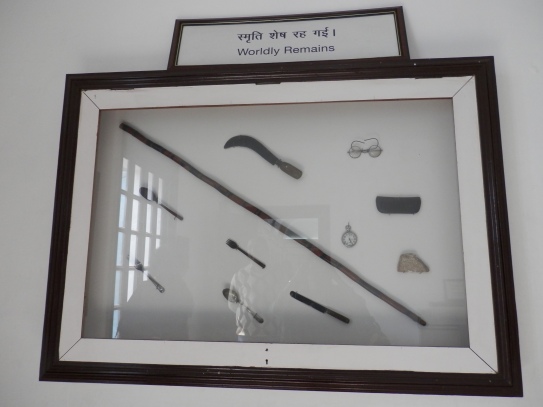 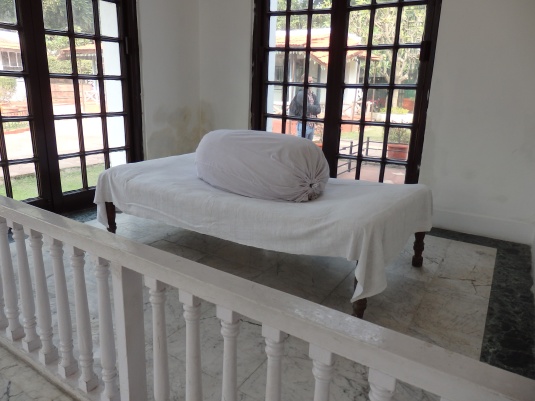 A little space where he met his visitors (Birla’s house) 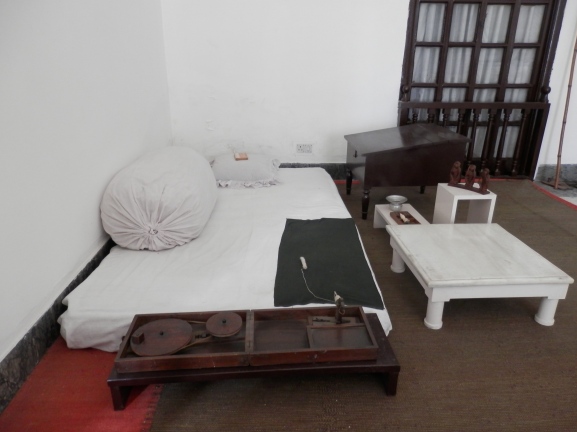 Spinning wheel and a desk to use his mighty pen. Three  favourite monkeys are also  in the image ” See no evil, hear noevil speak no evil”

Gandhis’ walking stick and his footwear 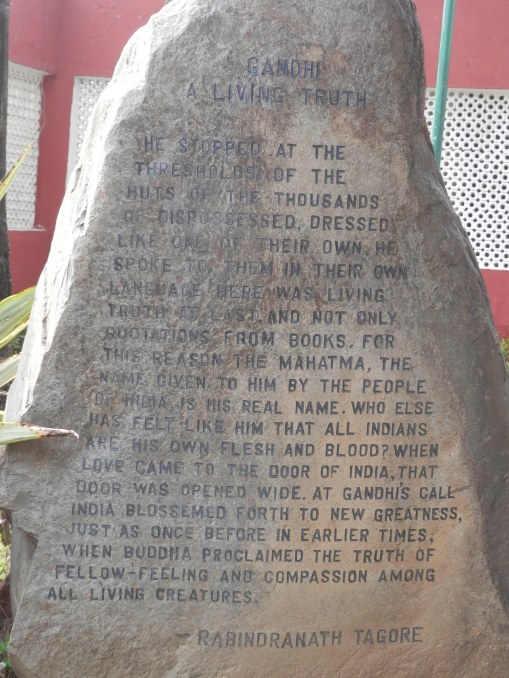